I Found A Puppy, Surprise!

As many of you know, last week I found a dog.

If you know me personally, you know I am crazy dog obsessed.

So naturally whenever I see a dog outside that appears to be alone, I run out like a mad woman on a mission to get it home.

Now, I must be honest. There have been multiple occasions where I have done exactly that, only to look at the tag and find that the dog is in its own yard…oops!

However, I knew this was not one of those cases because the dog was in my yard, haha.

I’ve been at home with my parents since we got home from Hawaii, because I had to get my wisdom teeth out before moving to Salt Lake.

Anyways, my parent’s backyard is a big hill that goes down to a wooded area and a creek.

None of the yards around have fences or anything so it’s all wide open.

Last Sunday around noon I looked out the back windows and saw a black dog wandering around our neighbors back yard.

She said no and we contemplated who’s dog it was…quickly realizing it was a lost pup.

Naturally, I ran outside to get her and couldn’t catch her. She was way too scared of me, like she wouldn’t even let me get within the same backyard as her.

I spent the entire day trying to lure her in but had no luck.

I even put a bowl of lunchmeat in the yard.

She scarfed that down and took off again before I could catch her.

I talked to the neighbor lady two houses down when I was in her yard (lol crazy I tried to tell you!) she said she had been watching the pup run out there all morning since like 8am or so.

Eventually I lost the dog and it was too dark out for me to see her anymore.

My mom convinced me that someone else caught her, so we went to bed thinking she was okay.

Although I refilled the bowl of lunchmeat and left it on the deck in case she was still out there and hungry.

I woke up the next morning and looked out the back to see the bowl was empty but still no pup in sight.

I assumed a raccoon or something had probably eaten the ham and the pup was inside safe and sound.

I kept looking for her throughout the morning though, obviously, just in case.

About 20 minutes later there she was running through our yard again.

Tears began to fall. (Not to be dramatic but I seriously cried.)

This poor pup was outside in the freezing rain all night.

Now I was on a serious mission, okay.

This dog was NOT going to be out in the cold any longer. No chance.

So I got my lunchmeat back out. This time: turkey.

I made a trail of it from my backyard leading up to the deck ending with a bowl of turkey next to the sliding glass door.

My plan was to wait until she took the bait, sprint out the front door and around the house to trap the opening of the deck so she couldn’t get away from me.

I just had to wait for the right moment.

She ran down in the woods for a while and then all of a sudden we didn’t see her anymore.

Holy smokes I bet she pooped herself!

After the deer ran off we didn’t see her for about 20 minutes or so, but then she ran right up to my turkey trail and I went crazy.

I darted out the front door, around the house, and crept up behind her on the deck.

She was scared but I just kept hugging and petting her poor wet self.

She was shaking, probably freezing and petrified.

My mom got a rope and we made her a makeshift collar/leash.

I wrapped her in a warm blanket in the garage while we tried to figure out what to do next.

She had no collar, so our neighbor lady posted photos of her on the QC Lost & Found Pets Facebook page.

I gave her a bath and we fed her more lunchmeat.

After 300 shares on the Facebook post and no leads on an owner, we took her to the vet to see if she was chipped.

The vet checked her teeth and estimated her to be about 5-6 months old and probably a lab/terrier mix. No chip.

We picked up some dog food and headed home.

We called the police department, humane society, and animal rescue shelters to see if anyone reported her missing. They hadn’t heard anything so we left our name and number in case someone called in.

We sent out some neighborhood emails and heard nothing in response.

To bed we went, she slept in my room in our old dog cage next to my bed.

Tuesday we woke up and I had to get my wisdom teeth out.

My poor mom had to take care of me and the new puppy we acquired, lol.

She went for her first walk but didn’t quite understand that whole concept yet, haha.

Wednesday she got some bones to chew on and lots of Love and cuddles as I recovered.

Also, another walk. She still had no idea what that was all about.

Thursday my mom and I hit the pavement. We posted again in that lost and found Facebook group.

We made some flyers, loaded this adorable pup in the car, and drove around trying to find her home.

We stopped at all the farms behind our neighborhood thinking maybe she ran a little too far.

Most of them weren’t home, so we left flyers in their mailboxes.

Then we proceeded to drive up and down the streets of all our surrounding neighborhoods asking anyone and everyone outside if they had ever seen this dog before.

It was a no from every single person. We made everyone take a flyer in case they heard of anything.

We drove out to the humane society and posted a flyer on their bulletin board in case someone came looking for her.

We posted a flyer at the YMCA and Hy-Vee, and we even started calling friends to see if anyone knew of someone missing a dog, lol. How had nobody ever even seen this pup before?

She couldn’t have just popped out of thin air.

Friday we took her out on a long walk.

I had been wanting to take her to the dog park to let her run, but we just weren’t sure how she would be around other dogs.

We walked her all around Crow Creek Park and took a few laps around the outside of the dog park.

She LOVED to see the other dogs and couldn’t have wagged her tail any faster at the sight of them.

She met noses with some at the fence and quickly made lots of friends!

Since then, she has done very well in the car and has embraced all the Love we’ve given her.

To say this pup and I are attached at the hip at this point is an understatement. 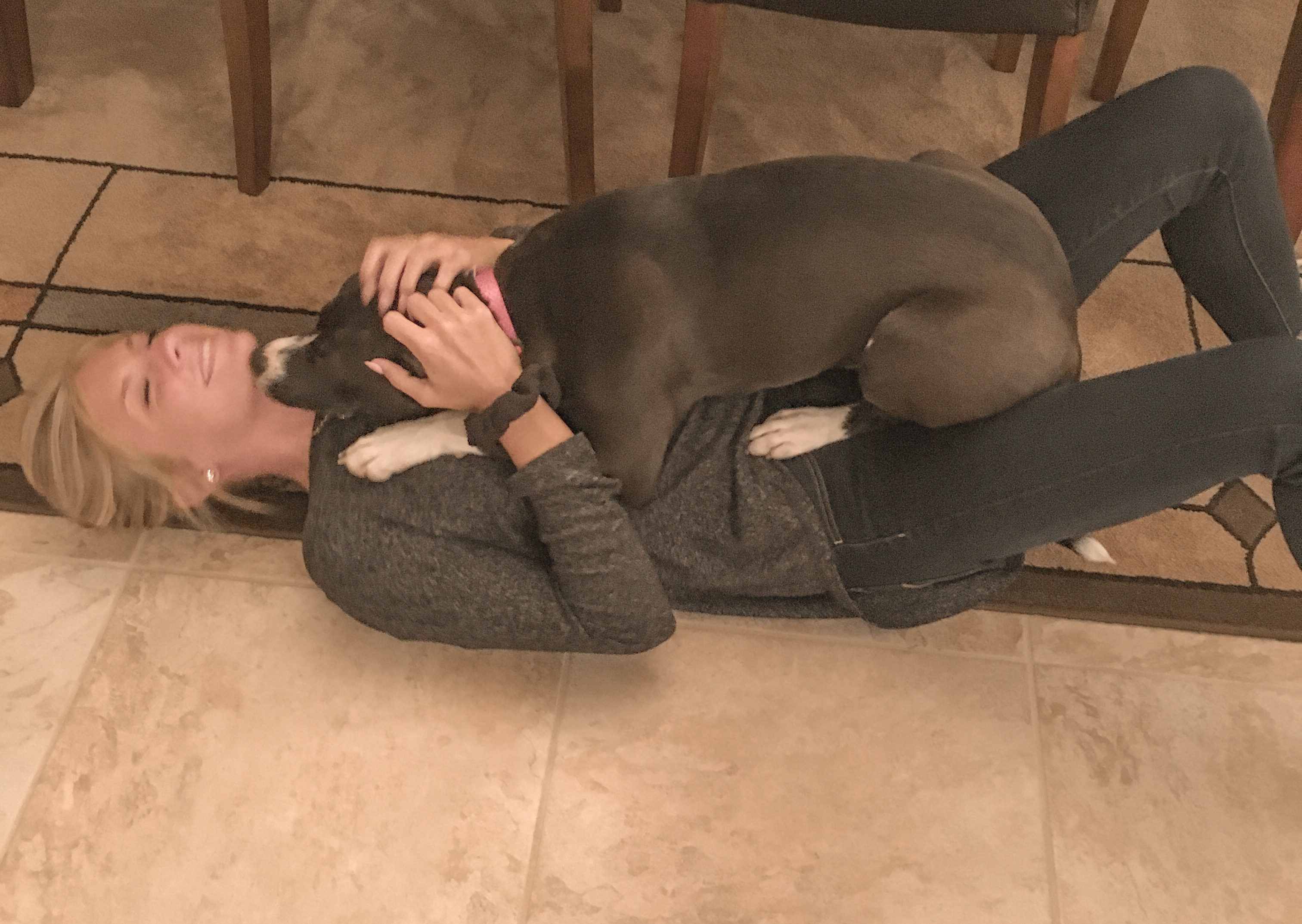 I get attached to dogs I see across the street without even meeting them, so it didn’t take much for me.

That’s why my mom won’t let me name her yet. (I’ve been brainstorming though don’t you worry lol.)

She may be more attached to me than anything though, believe it or not.

She cries every time I leave the room and can’t stand to not be curled up in my lap.

I’m not mad about it at all, haha.

She’s a very good dog. She has hardly had any accidents, sleeps through the night, and only cries when I’m not by her lol.

It’s pretty safe to say at this point that someone dumped this poor pup outside.

I’ve sat with her and cried thinking of how disgusting a person must be to do such a thing.

She’s an innocent, 5 month old puppy that was left out in the middle of winter to fend for herself.

If she does have a home somewhere, I hope her owner sees this to know that she has been cared for.

If she doesn’t, then I hope the A-hole that dumped her gets the karma they deserve.

We don’t have a set plan for her just yet.

I refuse to leave her at a shelter (I know some shelters are great but you just never know, and she’s already been through the ringer.)

My mom would Love to keep her but my dad has allergies.

We’re trying to work everything out so we can keep her, but time will tell.

If none of that works out then I’ll be finding her a new home where I know she will be Loved to no end.

If you have any ideas on how to reach any possible owner that we haven’t tried please comment and let met know!

Also, I would Love to hear any suggestions anyone has on how to fly a 25-pound pup across the country, lol.

Or really any suggestions anyone has on anything at all.

Just don’t tell me I’m crazy, I know that already and I don’t care, haha.

That’s all for now. I’ll keep you posted with puppy updates in the coming posts!